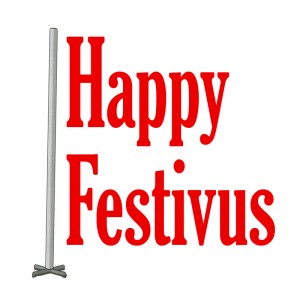 Many Christmas’s ago, Frank Costanza went to buy a doll for his son George. There was only one doll left and as he reached for it, so did another man. After struggling for the doll, he thought there should be another way.

The doll was destroyed, but out of that, a new holiday was born.

It was called Festivus, and as Frank exclaimed A Festivus for the Rest of Us!

Festivus is a nondenominational holiday that is celebrated on December 23rd. The TV show Seinfeld helped popularize this holiday. Dan O’Keefe a writer on Seinfeld father discovered the holiday in a book published in 1966. The O’Keefe family celebrated the holiday for years. Then Dan told the story of Festivus to the Seinfeld staff and the rest is history. Today hundreds of thousands celebrate Festivus.

How do I celebrate Festivus?

Festivus is still a new holiday developing traditions. Most of the traditions are based off the Seinfeld episode. The most common elements are the Festivus Pole, Festivus Feast, Airing of Grievances and the Feats of Strength.

Most Festivus celebrations today involve a party with a feast. The feast can consist of whatever the party holders decide. In Seinfeld Spaghetti is served. Most people serve foods that are associated with the television series Seinfeld.

For decorations there is an aluminum pole that is set up like a Christmas tree. The pole has no decorations. In fact Frank Costanza found tinsel to be distracting.